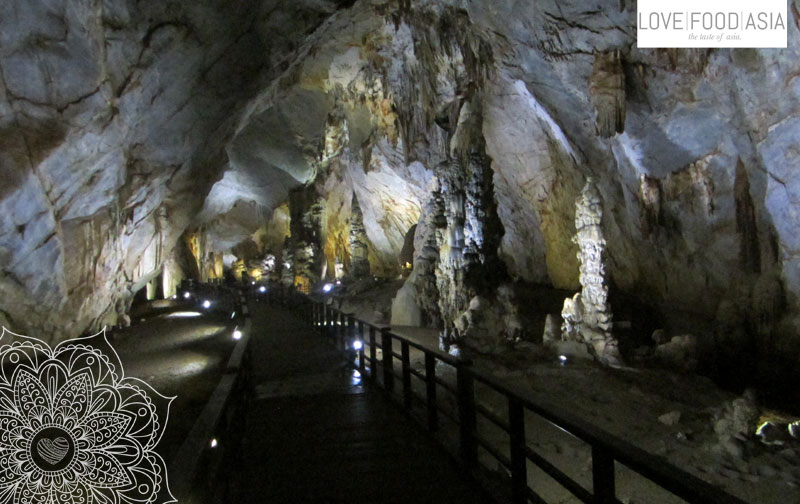 Yesterday I had a relaxing train ride from Hue to Dong Hoi. At the train station of Dong Hoi I got picked up together with three other backpackers from the Easy Tiger Hostel staff. When I arrived at the Hostel Chris from England was waiting from me. I met him at my hostel in Hue two days ago. He bought a motorbike in Saigon and is on his way to Hanoi. We had made an appointment to got out for a ride in the Phong Nha Ke national park of

After we´ve spent the evening with live music and some beer in the hostel we got up early today to explore the national park. On the back of the motorbike I was able to enjoy the ride and so I did. The national park looks like a big jungle with big rocks everywhere. It looks like you are in the middle of the Halong bay just without water.

In this beautiful landscape is so much to see. Me favorite is the Hang Soon Dong cave. The worlds biggest cave! But it isn´t open for public jet. So we had to go to the second biggest cave. I´m sure the Paradise Cave isn´t less breathtaking We arrived there right after they opened it and so we where one of the first visitors of the day. When we came out we met a big bunch of Vietnamese tourists entering it.

Next we drove to the highlight of the day. The Hang Toi Cave. Also called Dark Cave.
The Dark Cave is the smaller version of the Son Doong Cave. The reason for the name is that there is no artificial light installed inside the cave and with its total length of 6 kilometers it’s nothing but darkness! Moreover, the rocks inside the cave are dark, some gray some black. The cave is home to many lakes, with a water temperature of about 18 degrees. Inside the cave there are many unique things to see and experience! There is a natural mud bath at the end of one of the narrow passages and there are many ancient fossils to be found.

We met a Canadian couple from our Hostel and they shared a guide with us. Inside the cave it is totally dark and only our headlights guided us the way. In the Vietnam War the cave was stash for many Vietnamese families and some bomb crater can be found at the entrance. We made a few mud fights and swam in a big lake in the middle of the cave. The trip was an amazing experience for all of us. Especially the mud fight is a dream of every child. Chris brought his waterproof camera so we got some pictures from our tour.

Tonight I will take the night bus to Hanoi. The weather forecast says that there will be lots of rain at the Halong bay and so I decided to skip the bay and stay in Hanoi for my last 3 ½ days. That’s a reason to come back soon.