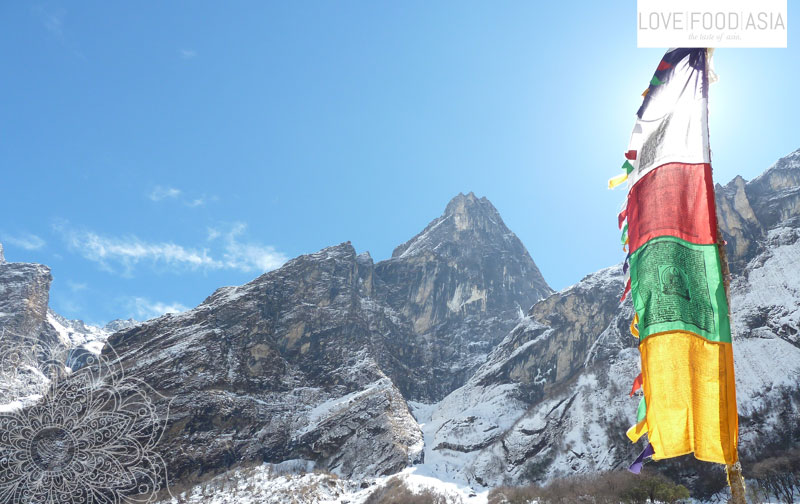 Last night we had to sleep in a crowded hut between 5 or 6 porters and guides. We had many blankets. It was still freezing cold at MBC. I woke up in the middle of the night and heard someone crying. It was one of my friends from Spain. He said that his eyes are burning like hell ant it seems like he burned his retina. What the hell. I remembered the last day. He really forgot his sunglasses. And as I can remember the reflections of the snow were so strong that I couldn´t walk one meter without mine. We tried to help him out with some normal painkillers and a watered towel to cover his eyes. What else could we do?

After this short night he called his insurance company in Spain and after one hour he got the okay for a helicopter flight to Kathmandu. We wished him all the best and we was making jokes again when we started our way down. With a smaller group of three guys.

We had to go back the same way we came up and walked in deep snow to walk further. We climbed old avalanches and after 2 hours we had our feet on snow free ground again. That was the moment when I realized my heavy sunburned face. Wow! I had used sunscreen yesterday but it wasn´t enough. Without wearing sunglasses my face looks like a carnival mask ?

In 6 hours walking time we saw the same landscape we already saw when we came up. But it was another few for me. One some points it looked like a totally new area to me. The big blooming Rhododendron tree and many small purple blooming flowers guided us along the trail.

In the early afternoon we made a stop in Sinuwa were a heavy rain started. We decided to stay the night. After Dal Bhat we went to bed and I listened to the heavy rain bumping on the roof of our guesthouse. I also thought about our experiences of the last two days before I felt to sleep.