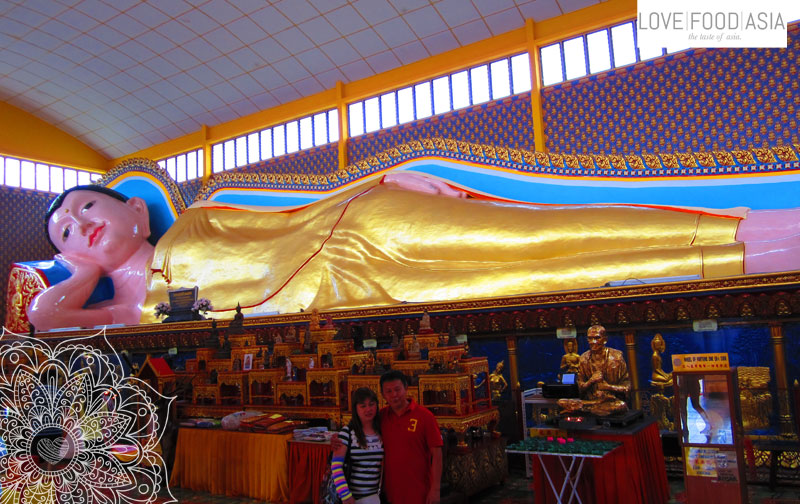 Penang is full of cars and right now full with Malayan tourists. There are school holidays at the moment in Malaysia. But here seems to be another vibe than in Kuala Lumpur. It seems like the people are less stressed than they are in KL. In the biggest city of Malaysia I didn´t feel well. But here it is different.

Lynn picked us up at 9:30 for another great breakfast. We had Dim Sum and Char Siu Bao with Chinese green tea. Energy for a long day full of Sightseeing.

With Lynns car we went to see the Botanic Gardens of Penang (Taman Kebun Bunga) also known as the “Waterfall Gardens” because of the cascading waterfall nearby. The original gardens were established in 1884 from an old quarry site, under the supervision of Charles Curtis, who was the first Superintendent.

From there we went to the Batu Ferringhi Beach where you can find a beautiful white sand on the beach. This area of Penang is also full of tourists in high season. But it´s a place you should visit when you come to Penang.

After a lunch break at one of the high frequented hawker food places we drove to the  Wat Chayamangkalaram temple.This Thai Buddhist temple is most notable for its Reclining Buddha statue. The statue is the 3rd largest of its kind, being 33 meters in length. In the main shrine in front of the Reclining Buddha there are smaller shrines of different Buddhas and popular Thai deities. Also on the temple grounds many colored statues of Devas and other mythical creatures are on display. The temple was built in 1845 on a piece of land given by Queen Victoria to four women trustees as a gesture of goodwill to boost trading relations with Thailand.

In the afternoon we moved on to see the Kek Lok Si Temple of Penang. It is a Buddhist temple situated in Air Itam in Penang and is one of the best known temples on the island. Its also the highest Buddhist temple in South East Asia.

A long day came to an end with a stop at the seaside to see an amazing sunset with lots of orange and red colors filling the sky. With an empty stomach Lynn brought us to a place a tourist would never find. Street food at its best in a small dark street behind a metal fence. The best food so far! Thanks to Lynn for a perfect day.