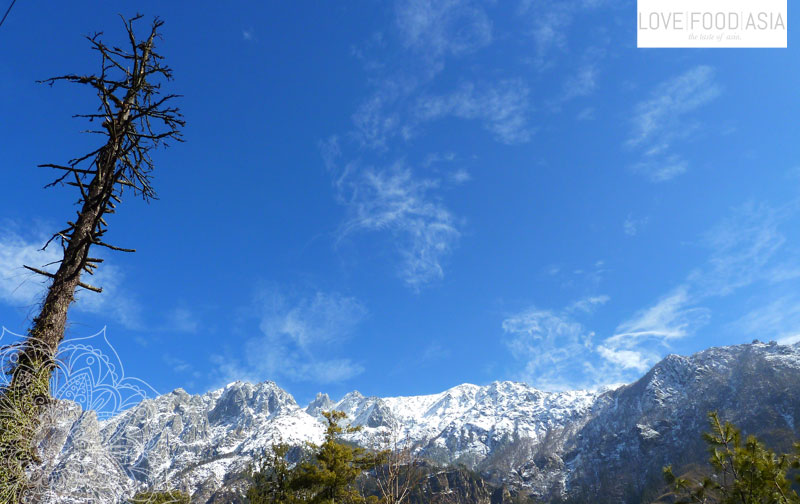 Through the thin wooden walls I could hear a heavy storm on the outside during the night. My (also thin) sleeping bag was topped with 2 big blankets so I was not freezing. I thought we would not be able to walk the next day because of heavy rain but when I woke up at 7 am I was surprised by the weather.

There was a cloudless sky and pure sunshine. Of course it was still cold but the view on the mountains around were amazing. We took a proper breakfast and started from Timang (2630 m) to Lower Pisang (3200 m). The sun guided us until the early afternoon before some clouds began to fill the sky. We had a tea break in Chame. One of the bigger villages on the trek. In Chame we also found a postoffice to send some postcards back home. (It took the cards 4 weeks to arrive in Germany)

The higher we walked the more snow was laying next to the trail. And on the last part of our daily trek we had to walk in 20-30 cm deep snow. Some other trekkers came down and said it´s impossible to make the Throng La Pass. There were heavy snowfalls in the last days and it seems like the weather will not change in the next days. But we decided to walk further. We have enough time we thought.

The steps in the deep snow were hard and the last km seems like they will never end. But finally we reached Lower Pisang and found a new looking guesthouse called “Dragon”. The family was very friendly and the wife made an incredibly good Dal Bhat. Once again there was an oven in the main room and we warmed our cold feet close to it. It was also possible to take a warm shower which was the highlight of the day.