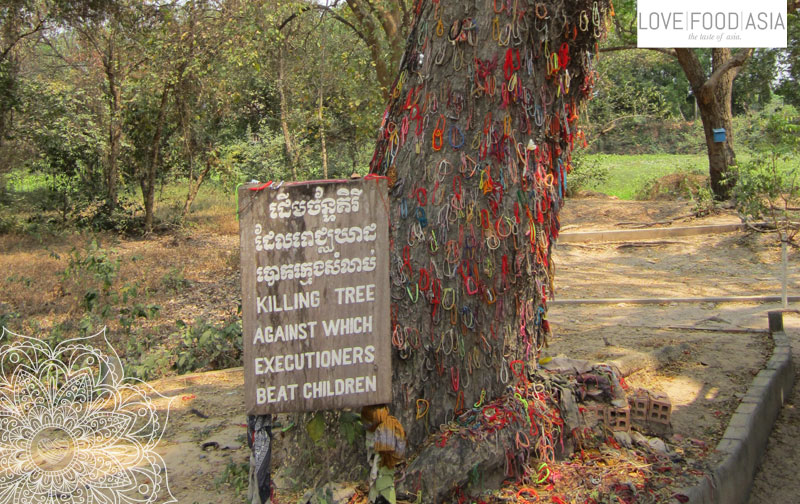 A must see place: The Killing Fields of Phnom Penh

I´m sitting on a bank under a tree with view to the memorial stupa at the Killing Fields and I´ve to organize my thoughts. The Killing Fields are the Choeung Ek memorial center. This place is located 14 km on the outside of Phnom Penh and can be reached by bus or as I did with a local driver on the back of his scooter.

I´ve finished an audio guided tour five minutes ago. What you can hear on this tour is really hard stuff. The crimes of the Red Khmer were absolutely terrible. I´ve heard about the Red Khmer before I came to Cambodia but to hear the story right here and now is so emotional.

The detailed stories about the crimes are horrible. They are telling you stories about how many people (women and children included) were killed by the Red Khmer. In the stupa I was looking at more than 8000 skulls of all the victims. You´re also passing a tree were the Red Khmer killed hundreds of babies. This is the most emotional moment when you´re at the Killing Fields. And you will need some time to realize what has happened here. The babies have been killed in front of the eyes of their mothers. All the others have been killed with tools for field work. The Red Khmer wanted to save ammo. While the Red Khmer killed their own people the speakers where playing communistic propaganda songs that the other prisoners couldn´t hear the victims scream. Unbelievable but true. This memorial and a KZ in Germany or Poland are two must see places to show how evil humans can be. And to show us in what kind of paradise we are living today.