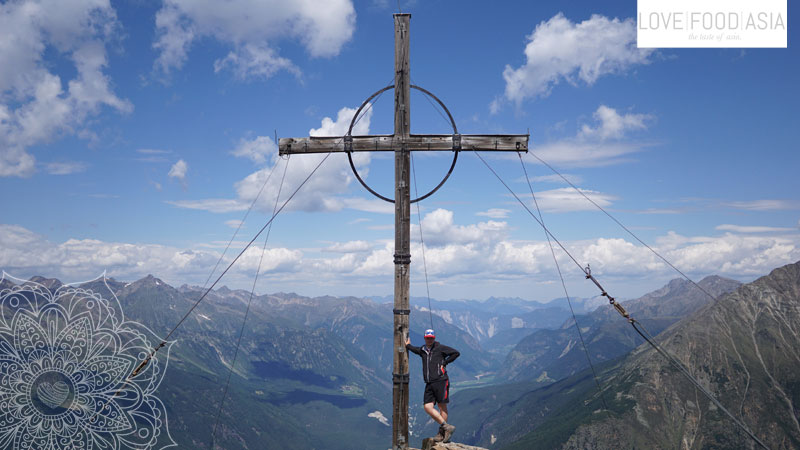 The official route of the L1 is from the Amberger Hütte up to the Atterkarjöchl and down to Zwieslstein near Sölden. On this route you have to cross a glacier and our originally plan was to hike this way. But last evening another hiking group told us that they came from the Atterkarjöchl and you couldn´t cross the glacier without gaiters and a crampon. We didn´t have one of those tools with us and so we decided to take a new route. After we´ve checked the hiking map we found an even more attractive route where we would have to clime one more Peak – The Gamskogel.

One more time we left the hut without the expensive breakfast because we still had enough food that we had bought in Gries yesterday. First we had to walk back in direction Gries. We passed the Sulztalalm and on half way to Gries the trail made a turn left where we had to cross the creek Sulztal. The gravel path led us uphill and after a few minutes we had a great view down on Gries. After one hour walking time we arrived at the Nisselalm where an old lady is the tenant. She´s in her 70s and still manages the alp. We ordered a coffee a enjoyed the warm morning sun in front of the hut.

After our break we said goodbye to the old lady and started in direction Gamskogel. It was a moderate path in the beginning. One more time we enjoyed the walk in this beautiful nature here in the alps. The way became more steep and after some climbing in the end we finally reached the Peak of the Gamskogel at 2813 m. From there we had a great view down to the Ötztal. We wrote our names in the peak book and sat down enjoy the fantastic round view.

Clouds started to cover the sky and we strated to climb down. The small path was very steep in the beginning and became very moderate in the end. Rock became meadows and we could see our final destination Längenfeld after a short while. Then we reached the small village Burgstein where we passed a very nice looking restaurant called „Siggis Jausenstation“ because of the dark clouds and the upcoming rain. Right after Burgstein you have the choice to take to routes. At the long route you can cross a suspensions brigde and at the short route you get straight to Längenfeld. It started to rain and so we took the short route.

We arrived in Längenfeld at the early afternoon and the rain had stopped minutes earlier. At the main street was a supermarket where be bought us two beer right before we took the bus to Sölden Zwieselstein. The DAV hut is right next to the bus station on the opposite side of the restaurant “Neue Post”. We brought our backpacks to the dorm, took a warm shower and went to the restaurant for an early dinner. The food wasn´t a great surprise but it was ok in the end. Our plan was to celebrate our first part of the alps cross and so we went to the second restaurant in Zwieselstein to have some more beer. At the Brückenwirt we had some good conversations and of course some more beer. Tomorrow morning we will take the bus and the train back to Würzburg before we will start the second part of the L1 in the next year.