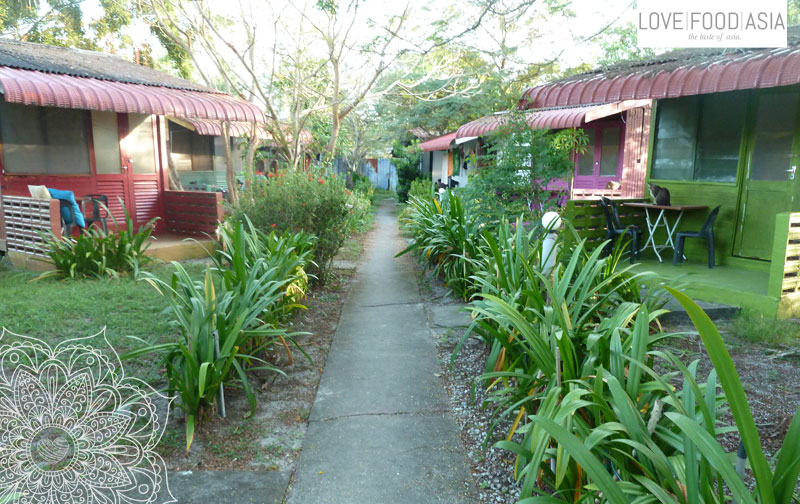 Last post: Read about our first day on Langkawi (SEA 16)

We stayed in a place called Shirin Homestay in Pentai Cenang on Langkawi. What can I say? Normally I don´t write review about the places I slept. But here I have to. The homestay is a place where the owner Ibrahim and his Japanese wife built a few bungalows in the back of their house. To be honest. At first glance the houses look really nice between the plants and blooming flowers. But behind the façade it´s a personal mess.

I can arrange with a dirty place. It´s cheep and that´s okay. But the owner was the angriest man I´ve met on my trip so far. It seems that he is alcoholic and after a few drinks he starts to shout at his tiny Japanese wife. We where sitting together with a guy from Germany , a girl from Italy and the Japanese owner. Then he showed up and forced us to talk about politics and what is going wrong on this planet. We tried to tell him politely that we are not in a mood for a conversation like that but he became angry.

For the first time on this trip I really was afraid. I was afraid that this old Iranian soldier (That’s what he told us) would start to beat us and his wife. She was not able to stand the conversation and so we got up and went away with a bad feeling. I really thought about leaving this place right here and now.

This was the strangest and most frightening situation on my whole trip. The next morning the guy was sober again and I seems like he didn´t know anything about what happened the last night. We already had booked a ferry for the next day so we decided to stay here for one more night. Still with a bad Feeling.

Now I heard that the wife has left her husband and is now living on Penang but I don´t know if it´s true. But I know that the guy is still running his homestay with or without his wife. And so I only can highly warn every backpacker to stay in this place. I know that people can change and that alcohol can be a hard drug but it´s also a mirror of the humans soul. And this man showed us his black and angry soul and I know that I will never stay in this place again.

Next post: Where to find Street Food in Pentai Cenang (SEA 18)