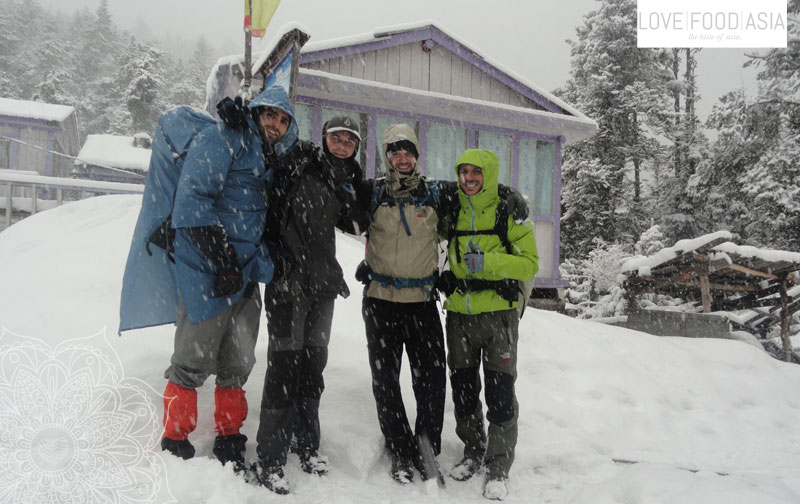 Annapurna Circuit: Back to Besisahar (Nepal 8)

After the one day break in Lower Pisang my body wanted to walk again. I couldn´t await to get up and start walking. Come on. The weather will turn into good. But…

I opened the door and I saw big snowflakes falling down the cloudy sky.

Not tiny little flakes. No. Big, big flakes. It seems like we have to make a decision. After the breakfast we did so. We decided to walk back to Chame and take a Jeep to Besisahar.

We started to walk and we all were totally disappointed. The snow was deep and it was hard to walk. We tried to focus on what will come. We have many days left. We had some funny snow fights with the to other guys and for a while I felt like being 10 years again.

On the way back I also saw the first avalanche in my life. On the opposite side of the river it was coming down making a fearing sound. It´s amazing with what kind of power the snow is searching it´s way down.

We walked further and the snow turned into heavy rain. My jacked couldn´t stand the rain and after 2 hours I was totally wet. But we made it to Chame and after a warm tea we tried to catch a ride back to Besisahar.

It was hard but we could bargain the driver down to an acceptable price. With our wet clothes we took seat in the back of the Jeep. The only thing I could change were my socks.

The ride back was bumpy as hell but fun. This Jeep ride was even more bumpy than the train ride from Yangon to Mandalay in Myanmar. But after a while it turned into an horror trip. The rain was still heavy and the (Flip Flops wearing) driver (who also was speaking on his mobile every 10 minutes) had to drive on the “road” were we could see the river from. But the river was 100 meters lower than us. And there was less than 1 meter between us and the cliff.

But after 6 ½ hours we made it back to Besisahar were it was still raining. In the same hotel were we started a few days ago I realized that I lost my pocket knife (which was a present) in the Jeep. I was in a bad mood. What will come now? What to do next? I don´t know. I just need some sleep!

Next post: Dangerous Jeep ride from Chame to Besisahar (Nepal 9)