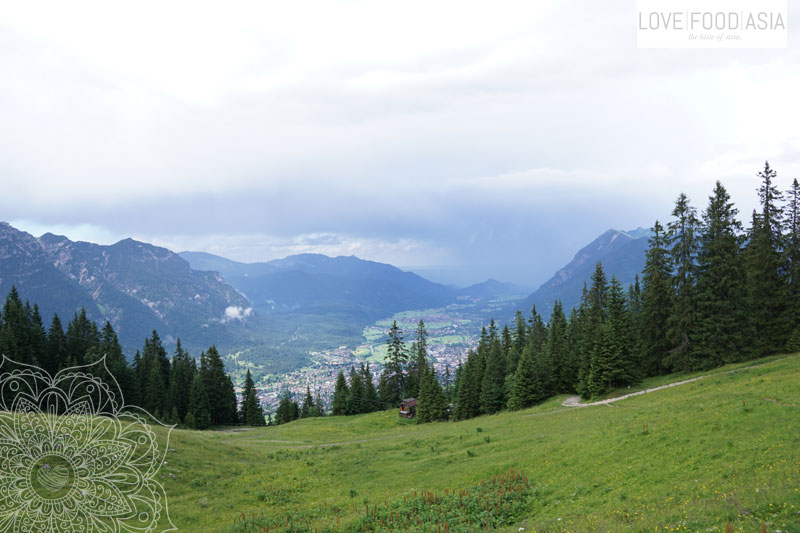 Warm up: Arrival in Garmisch and first ascent (Alps 1)

In contrast to many other alps cross routes the L1 from Garmisch-Partenkirchen to Brescia isn´t a „classic established“ long-distance walking trail with continuous marks. It is the opposite. Hans Losse, who was the first person that walked this trail tried to avoid streets, busses and lifts during his plannings in 1989. On the L1 you will only need your feet to get ovover the alps. And that is – in our opinion – the biggest benefit of this trail. The route is ca. 400 km long and you have to walk 60.000 added altitude meters. depending on your own Fitness you will need 26-30 days for the complete trail.

Our booked ICE started exactly at 8:04 a.m. at Würzburg Central Station in direction Munich. In Munich we changed trains and drove in an slower Regio Express through a wonderfull pre-alpin landscape to Garmisch Partenkirchen. The sun was shining brightly and we had the perfect mood to start our first ascent. But first we had to buy some provisions for the next days. The fare on the lodges is pretty fine but also pretty expencive when you travel for more days. And as we have learnd on our trekking trip in Nepal and on our 100 days trip in South East Asia you have to Keep your money together.

We had packed some water and energy bars in our backpacks and started to walk on the main trail. We started at the train station and passed the olimpic ice-sport hall and the big wave pool. we walked over the rails and walked in direction the forest border. The sun guided us anlong our way through summery meadows. We started to walk uphill until we reached the forest and we overtook the first two hikers on the trail. We passed the Kochelberg Alm and reached the Bayern Haus wich was half the way to the Kreuzeckhaus. We decided to sit down and have a cold beer in the warm summer sun. We sat in the front of the empty house and where the only two guest until the two hikers showed up. We had a nice chat with the likeable couple and decided to walk the second part together.

Involuntary shower – Arrival at the Kreuzeckhaus

On the last part we walked steep uphill with a group of four and had some really nice conversations. Meanwhile the cloud was getting more and more covered with dark clouds and at than it started to rain heavily. The summery weather was interrupted by a heavy downpour and we knew that we are in the mountains now. Our rain jackets stopped most of the rain. We had to walk for one more hour and when we reached the Kreuzeckhaus the rain stopped abrubtly. We´ve made a reservation in the DAV lodge in advance but the house wasn´t booked out. We hung up our wet clothes in the dry room and took a short but warm shower. The sun came out again and we walked around the house. In front of the lodge we had a great view on Garmisch and the valley.

An evening at the lodge: Our first mountaineer meal

We met the couple from the afternoon for dinner and we had the first mountaineer meal on our trek. The mountaineer meal (German: Bergsteigeressen) is a cheap warm meal you can eat when you stay in one of the DAV lodges. It´s a bit like Dal Bhat in Nepal. You won´t be served lentils but the noodle dish will save you some Money when you are on a longer trek. Our fist mountaineer meal was finger shaped potato dumplings with a mushroom sauce. A high Quality mountaineer meal. After dinner we had two more beer and played a Card game with our new table-mates. We teached then how to Play Dumbal – a Nepalese card game. You have to Play fast and we´ve had many laughs before we felt in our beds.