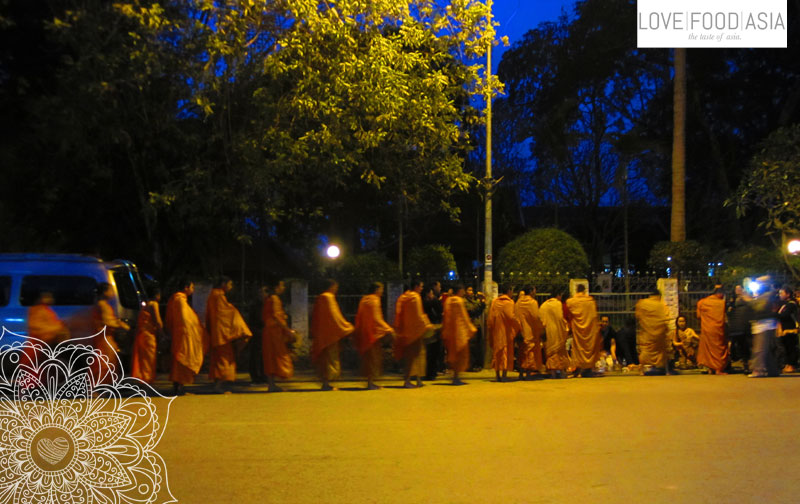 My day started early. Exactly at 5.40 am. I walked to the famous street where the monks get their alms every morning. The alms giving can be found all over Asia and the Buddhist believe that giving alms to the monks brings them luck. Here in Luang Prabang are a lot of monks on the streets so this procession became very famous. It´s an impressive view. But it´s not impressive to see the Chinese tourists taking pictures of the monks. There are more Chinese tourists with smartphones, cameras and tablets on the streets than monks. They don´t respect the monks. They come so close to them just to get a picture. I was ashamed.

From the procession I went back to bed and slept until 10 am. Guided by the French girl I walked to the Mekong riverside to rent a boot. Afer some hard negotiations we rented a fishing boat for a fair price to get to the Pak Ou caves. We reached the caves after a 1 ½ hours boat trip upstream the Mekong. The caves are unimpressive but the more that 1000 tall and small Buddha statues in one of them is worth a visit.

Near Pak Ou (mouth of the Ou river) the Tham Ting (lower cave) and the Tham Theung (upper cave) are caves overlooking the Mekong River, 25 km to the north of Luang Prabang, Laos. They are a group of two caves on the west side of the Mekong river, about two hours upstream from the centre of Luang Prabang, and have become well known by tourists.
The caves are noted for their miniature Buddha sculptures. Hundreds of very small and mostly damaged wooden Buddhist figures are laid out over the wall shelves. They take many different positions, including meditation, teaching, peace, rain, and reclining (nirvana).

For me the boat trip was the highlight. I enjoyed to lay on top of the boat and the monotone sound of the motor made my eye lids become heavy.

On the river Mekong are no buoys so that the driver has to be good in his job. The river is full of sand banks and big rocks. The driver has to know where he can drive his boat.