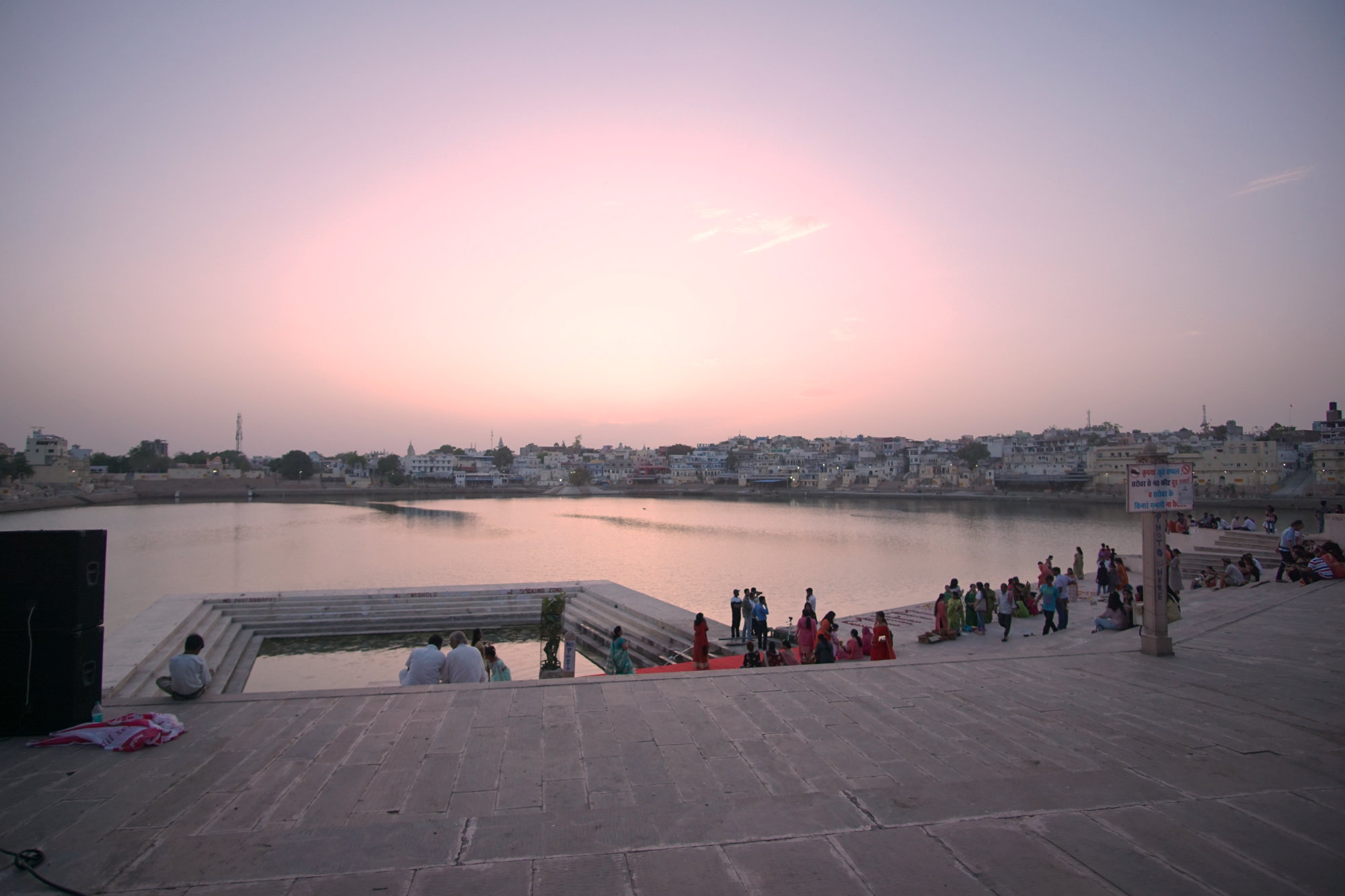 Pushkar – Magic of the Holy Lake

What is so special in Pushkar?

Have you ever heard about Pushkar? Sometimes it is said in the content of the Holi Festival. But the colorful Holi Festival is celebrated all over India. If you are Hindu you’ve definitly heard from this small city in Rajasthan. The Pushkar-Lake wich is the center of the city is a holy place for all Hindus. Once in a lifetime – they say – you should visit the lake. The city is located in the Aravalli Range near the desert Thar. It is 145 kilometers south-west of Jaipur. Every November a big camel market is held in Pushkar. Maybe because of the proximity to the desert. During the market, where more than 10.000 visitors are expected every year they build a tent city in and around the city. On our Rajasthan round trip we visited the city, had a view into to small side streets and we searched for the best street food in Pushkar. We also became part of an You Tube video of an famous Indian blogger. How? We tell you in this post about the magical city.

How to get there

The best way to get to Pushkar is by bus. There are many daily busses from Jaipur and Jodhpur that can easily booked on redbus.in. The nearest train station is in Ajmer wich is 15 kilometers away. Trains from and to Jaipur and Jodhpor start a few times a day from here.

The best time for travels to Pushkar is from October till march. The temperatures in the main-season are really pleasant. But the hotels and hostels are full and also much more expensive than in the off-season. Temperatures are rising up to 40 degrees Celsius and even higher from April to June. Hotels and Hostels are really cheap during this season. Monsoon happens from July to September and the sparse landscape turns into a full green. But it can rain a lot and during the last years many floodings happened during the monsoon season in Rajasthan. We visited the city in the hot off-season. It was hot but we saw more advantages than disadvantages. He had a really cheap sleep and the streets wasn’t that crowded.

As we said in the beginning most of the visitors come to Pushkar because of the Holy Lake. And you can feel it all over the city. The pilgrims don’t care about the hight temperatures and we could see a lot of them in the city and near the lake. When its getting dark the pilgrims come to the Ghats to follow a Hindu ritual in the lake. The Ghats are some steps into the lake. The best knowns Ghats are in Varanasi and go into the Ganges river. When you aren’t Hindu you are not allowed to enter the steps. The other parts around the see can only be entered without shoes. A part of the ritual is to give a gift of blossoms to the lake. And here you have to listen. Giving blossoms to the tourists is a typical tourist trap. Better stay away from the women an men who offer you some blossoms “for free”.

The Brahma-temple in Pushkar has a structure that dates to the 14th century, partly rebuilt later. This temple is also a main sights next to the lake. Brahma is the creator god in Hinduism. Brahma is traditionally depicted with four faces and four arms. Each face of his points to a cardinal direction. Many ceremonies and celebrations are held in the temple. Normally it is very crowded around this temple. But there is much more to see in Pushkar. Of course there are much more Hindu temples but we also found real good street art in the streets. A walk in the side streets is worth a walk.

It is not hard to find good food in Pushkar. But most of the offered food is for the tourists and you have to look a bit closer to get authentic Rajasthani meals. And the cuisine of Rajasthan is something you should try. Many snacks are deep fried but its hard to say no to the little sins. The most unappreciated dish is Poha. It is made with puffed rice and a great mixture of spices. In this You Tube Video you can see how the dish looks and how it tastes. Matthias and me became guests in this video because we met an Indian Youtuber, blogging about food.

The base for Poha: Puffed rice

A big bowl of Chole Bhature

Street Food in a recycling bowl

One thing is for sure. When you visit Rajasthan you can’t skip a visit of Pushkar. In main-season it is packed with tourists and Hindu pilgrims but a trip to the holy lake is also a bit magical. Food and some crazy people are some more good reasons for a visit. If you plan to visit Pushkar and you need more informations feel free to contact us. We try our best to answer all your questions.