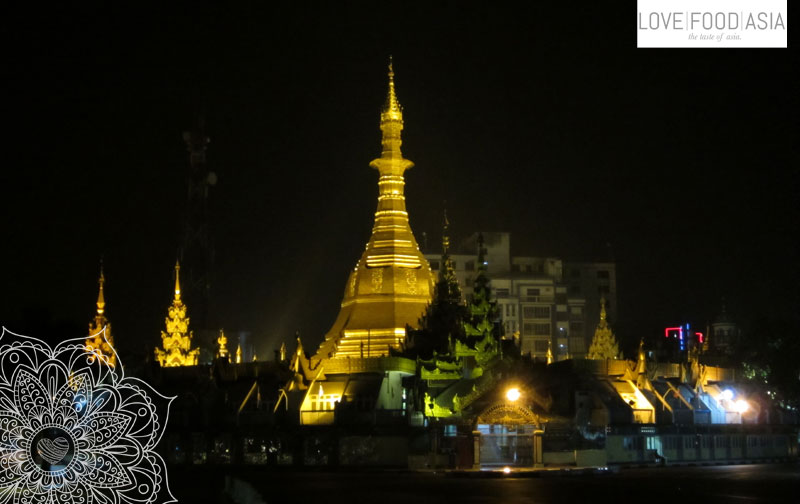 Right after a simple and cheap breakfast on the streets we went to the airport to catch our Air Asia flight to Yangon. On the train we met Nicolai a French guy from Toulouse. Accidentally he was on the same flight and he had the same plans we had.

The flight was quick and easy and within one hour we´ve been to Yangon. We changed some dollars into the local currency called Kyat. You become a millionaire within seconds. For 100 dollar I became 98000 Kyat back.

Right in front of the airport the local taxi drivers a waiting to make a good deal with you. It is the same everywhere. Start walking and when there is one guy left you start to bargain. So you make sure to make the best deal.

We drove to the city center where we´ve booked a 5 minus 4 stars hotel that is way to expensive. The French guy payed 4 dollars per night and we paid 15. Ok, first lesson learned.

The first impressions are very good. Yangun is the biggest city of Myanmar and when you drive from the airport to the city center you can see it. When it gets dark outside the street life begins. We went out with the French guy and another guy from Frankfurt to get some street food. This isn´t hard to find in Yangon. We found a small place with little plastic chairs and had a great dinner for 800 Kyat what is 60 EUR cents. Tea for free.

We walked though the streets oft he city and kids where waving to us. Adults asked us to join their games. Everyone seems to be friendly and you can feel that the border isnt´t open that long. After a while we walked into an old bar where we had some beer with some local guys. We had good conversations and the guys where impressed by my tattoos. (Not for the last time in Myanmar) The looked at my arms like a child is “reading” a picture-book.

But we still could feel that there is a military dictatorship in Myanmar. The police and officials in uniforms are everywhere and when we spoke about politics the people sometimes said. “Psst, not that loud. Not here” That’s a bit scary but we hope for more democracy soon.

On our way back to our small hotel we passed the Sule Paya. The most historical roundabout of the world. In its center stands the Sule Pagoda. According to legend, it was built before the Shwedagon Pagoda during the time of the Buddha, making it more than 2,500 years old.

Remember: This trip was in 2013. Many things have changed since that time.