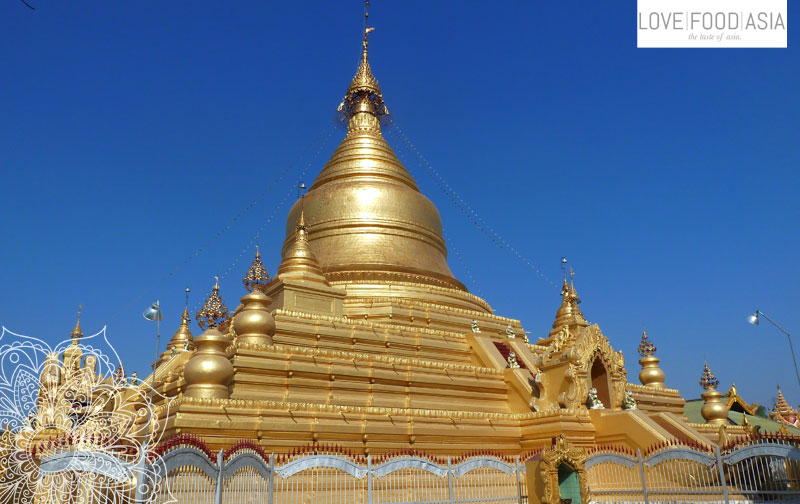 Our first day in Mandalay (SEA 34)

There is one big plus for the Myanmar railway company. It is more punctual than the German Bahn. But on the other side it is much slower as well. As we feared we had a very bumpy night in our sleeper with less than 2 hours sleep. It also was cold as hell and we had to wear long trousers, shirts and a hoodie covered with a blanket. When the train arrived at the Mandalay main station we both looked very sleepy and had to orient first.

First we walked in the wrong direction for 15 minutes where we met many bare feet monks begging for food. When we realized that we are wrong we stopped at a little tea house to have a breakfast and green tea. We arrived at the AD 1 hotel at 7 and our room was free. So we decided to sleep for 3 more hours.

At 10:30 am we walked out for some sightseeing. We passed Mandalay Palace and walked over to the Kuthodaw pagoda. This pagoda is built with 729 little temples looking like pavilions. Inside every temple is a marble plate. On all the plates you can read the Pali-Kanon. The lessons of Buddha. That’s the reason this pagoda is also called the biggest book in the world. Before this pagoda was built the Pali-Kanon was written on parchment.

From there we walked tot he Sandamuni pagoda. That’s a stupa in the south west of Mandalay Hill. There we had a delicious lunch at a small street food stall and a short nap in one of the temple courts.

With our bare feet we had to climb Mandalay Hill. The view up there is outstanding and when the sunset was near the placed got very crowded. We took some pictures and had some conversation with some local guys. For the third time in Myanmar my tattoos where the reason why people had a longer conversation with us.

From there we shared a taxi with a French guy who is living in Taiwan. He is married there and works as a university professor and as a writer for a French tourist guide. He was a likable guy and we promised to meet again in Myanmar.
Tomorrow we have to get up early. We´ve planed to rent a taxi to explore the villages around Mandalay.