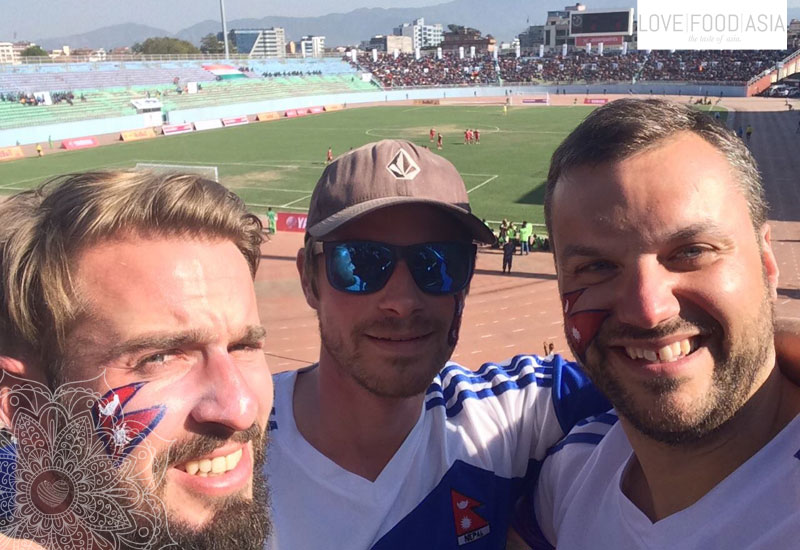 Coincidence belongs to backpacking like the clowds belong to the sky. And today was one more day where king coincidence surprised us with another fantastic experience.

After a very simple breakfast Thomas, Matthias and me where informed from the owner of the hostel that today is a Worldcup qualification game here in Kathmandu. Nepal will Play against India. Wow, what a chance for us. There was not much to think about. A few moments later we where on the way to the stadium of Kathmandu to get some tickets.

Nepal isn´t well know for football and we heard that they lost the first leg with 2:0 in India. But we wanted to support the Nepalese team in the Dasharath Rangashala Stadium as much as possible.

The Dasarath Stadium is the biggest stadium in Nepal. It is mostly used for football games and culturel Events. It can hold 25.000 people. The stadium was built in 1953 and you can see it.

When we arrived we had to ask where we can buy some tickets and a few moments later we had bought our tickets. Absolutely easy and uncomplicated. We had enough time now and so we entered the Nepalese crowd. We where treated like being Nepalese and so our cheeks where painted with the national flag of Nepal. Now we are prepared.

Together with the other fans we walked to the entrance of the statium. We had to pass a lot of rubble to get there. The admission control was close to non existent and we took a seat moments later.

The stadium wasn´t sold out completely but the atmosphere was hilarious. We watched a game on low level with just a few chances. Both teams played more like 4. league teams and not like national teams but we tried our best to support the Nepalese national team. At the end there was a fair 0:0 although Nepal had more chances.

After the game we walked back to our hostel. On the evening we where still thrilled about this experience. It is another example how friendly the Nepalese people are. We felt more than just welcome in this country.